Master of the ACE MARK

The Ace believes he's the perfect wrestler because of his intelligence and analyzing skills, He uses his smartness to beat tougher opponents using the environment, the timing and his lack of integrity that helps him do whatever needs to be done to walk out of every match on his feet

He's Aggressive, Fast, Quick at reacting and smart enough to bait his opponents into his traps to gain the upper hand.

Lived in a poor neighborhood where he acquired his street smart, with his brain and lack of morality or conscious he was able to grow and bring himself to the better life he has.

He had no issue using any means possible to reach what he wanted eventually.

[directing] behind the scenes (ooc)

The Ace is also the director of Premier Wrestling road/house shows [Unplugged]. making sure to throw the best LIVE shows for the attending fans.

Later on another booker took over Unplugged and The Ace became the booker of the 2nd studio show [NAW]. making sure to have the live shows go as planned and well filmed for youtube.

[training] behind the scenes (ooc)

The Ace trained many new comers who ended up becoming great wrestlers making their impact in main events and throwing great matches.

Starting his Debut He was on a mission to prove himself by Marking every single target he lays his eyes on, By the end of the Season he already was considered one of the most threatening wrestlers on the grid. He's consistently getting booked in almost every week's main event.

He then had a feud with Johnny Angel ending in him superplexing Johnny onto a pile of chairs then using the Blackout for the first time ever. it ended Johnny Angel's Career here

Earned his first Middleweight Championship in 26th September 2019 by winning the first ever TLC match hosted by Premier Wrestling in season 2's finale.

he lost his title to The Crisis who turned out to be unpredictably strong.. was a tough match and Tyler who was with Crises was able to stop The Ace from cheating his way out of this match.

Ace started winning all his matches in questionable ways..

sometimes the referee only count quick when Ace is pinning, and not counting at all or very slow when Ace is being pinned, sometimes even Ace's opponents would lay down for him to win.

Later it was shown that some mysterious man is controlling these incidents from outside by bribing, blackmailing and/or threatening anyone who can be a factor in Ace not winning all his matches

Ace almost beat Omega the same way but Omega changed his mind and started fighting back.. The powerful Omega almost won if not for the referee not counting at all, Ace used Omega's distraction to quick count him winning the title

Omega didn't walk out peacefully, he raised hell on Ace. Ended in Omega getting injured by Ace's Blackout after the referee (using a chair) and the mysterious man's bodyguard going in to help Ace overcome Omega.

Ace then used his Blackout that deeply injured Johnny Angel putting him out of wrestling for a long time. He used it for the 2nd time now on Omega ending his career once and for all

Omen returned from his injury and chased after the current HeavyWeight Champion which was Ace.

Ace used his plans, his tricks and with the help of Earl (the referee), Samoan Thug (the bodyguard) El Jefe (the mysterious man bribing and threatening everyone to help Ace).. Ace was able to win a very hard match VS Omen at the mid-season

Omen worked on leveling the playing field, he took out Samoan Thug after, Earl betrayed El Jefe and called the FBI to arrest El Jefe but El Jefe escaped

Ace now is on his own, has no bodyguard, no El Jefe, and Earl's obedience was questioned

Ace lost his cool, agreed to fight Omen because of Ace's anger even when this match had Ace give away his championship advantage risking him to lose the title and being unable to do his tricks to keep it by DQing himself or Counting himself out

Ace was very angry he almost beat Omen after 3 Ace Marks in a row. But then he released the pin deciding that instead he wants to end omen's career by injuring him using the Blackout

Ace promising to be back on track and in control of his emotions and to be the one manipulating his opponent's emotions.

The Week after.. Ace came back and decided to find Hunter's weakness and he found it in the arena. Ace attacked Hunter's wife in the fans area while she was watching Hunter fighting in the main event. Hunter got distracted checking on Keira worrying about her as Ace escapes and as the ref counted Hunter out

In the season finale after a BRUTAL match with 9 broken tables, bunch of chairs and ladders Hunter was able to get the upper hand and almost win. Ace grabbed Keira and threats Hunter to let go of the title or Keira will be harmed

BK comes out running, Hunter feels safe and grabs the title. goes down to get MARKED by the ace and sees BK helping Ace out to kidnap Keira as a hostage since Hunter got to keep the title

Ace's deal: Hunter accepts a 1 on 1 title match but hunter has to have his hands cuffed behind his back during the whole match. if he accepts he gets Keira back regardless of who wins this match.

Ace finaly got his first win over Hunter this time, but he also made sure that this would be the end. He put Hunter's head in a steel chair then smashed it with a sledge hammer. then he used the Blackout that ended the career of 2 other legends. Hunter's career ended here

Then Ace goes on to start his reign as the Champion, his first title defense was by tricking the referee into DQing his opponent "SMF" thinking he used a weapon when he didn't.

The Ace had his eyes on Trey Steel and Isaiah Jenkins from the VIP Team.

Ace kept trying to MARK them but they kept backing each others up everytime ruining Ace's plans.. Eventually with the Help of LG who made a surprise return to Premier Wrestling Ace managed to Mark Trey.

Ace & LG were announced to face Trey & Isaiah in a 2 on 2 ladders match where both Ace's and Isaiah's Titles (Middleweight and Lightweight Championships) will be hanging.. and whoever grabs a title takes it as his own

LG managed to grab the Lightweight Championship.. Ace Marked LG because he won early leaving him alone to face both of Trey And Isaiah

Ace managed to MARK Trey and was about to win..

The Arena went dark.. Vigilante Hunter music started playing.. Hunter appeared behind The ACE and beat him up so bad injuring him severely then taking him out of the Arena leaving Trey to win the Middleweight Championship

Later it was announced that the Medical team called Ace's career over. Announcing that his injuries are too severe to ever come back to the ring 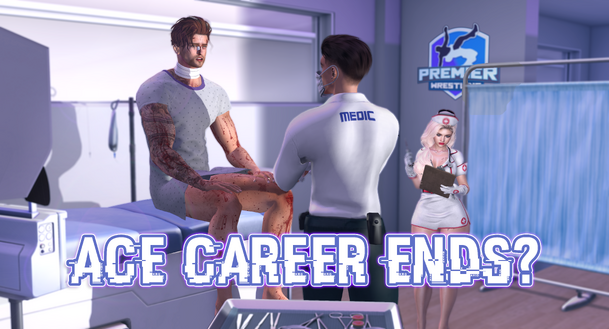 The ACE returns to the fight scene!

The Ace joined VCF (Virtual Combat Fighting) and been undefeated ever since.. and after 5 weeks from joining he's already beaten the undefeated 11-0 Chuck Anderson and became the VCF Openweight Champion

The ACE vs CHUCK ANDERSON

The ACE goes on and take on Hunter for his World Heavyweight champion ship in attempt to bring the title back to premier wrestling and it ended up in a HUGE bloodbath where Hunter's mask broke revealing some of his old face injuries. Hunter ended up getting Ace Marked and losing the title to The ACE

Watch this match here: The ACE vs Vigilante Hunter Season 10

The Ace is having it all.. The people are behind his back, the NAW invasion is out of the way with no threats to match him in overload and the Heavyweight Championship on his shoulder

The Ace yearns for a challenge he kept challenging the roster 1 by 1 every week in a title match every single show. None was able to beat The ACE. Until Xander Garcia finally after long struggles with the board, decided to quit as a GM and come back to the ring.

Ace jumped on the opportunity and offered him a title match if he'd take it and X did not disappoint. However, LG did.

LG abused his new powers as the new GM to make Ace's and X's life a living hell to the best of his lackey's abilities. until Ace and X decided to stop fighting amongst each others and take them out so that they can finally do the match that was long waited for at the season finale

In Season 11 Finale X got Marked! But the Referee accidentally got hurt in the process leaving no one to count the pin that lasted for almost half a minute. eventually by the time a new referee was sent X was able to recover and turn it back to his favor using his experience to beat Ace and take the Heavyweight Championship from him.

Father Freud came after The Ace trying to make him confess his past sins, he tried everything he can to force him to do it including breaking his MMA Championship belt destroying it

The Ace gave Father Freud a taste of his own medicine by breaking Father Freud's Cane and by Ace Marking him.

Father Freud retaliated by kidnapping "Bunny" Ace's wife, forcing The Ace to accept a blindfolded match against Father Freud to get her back. However, even tho The Ace accepted that match, Father Freud backed on his words and didn't return Bunny to him.

Instead he told him he'll give him a chance to win her back if he beats Father Freud in a TLC Match where the keys to her freedom will be hanging above the ring. The Ace won and got his wife back

"The Ace" name was picked because it means the master or the perfectionist, The Ace always makes sure he's the best at what he does, works on his strengths and overcome his weakness by using his street smartness which taught him how to fight dirty without getting caught.

Since he believes everyone is dumb, people don't know anything, he believes he's the smartest person in the wrestling community and will prove it by marking every single performer with his Ace MARK. proving they are not worthy of where they are currently at, just to show the world that what they think they know is very far from the truth, and only him can see every angle of every situation. His goal is to proving the world dumb and shows how he's superior to everyone else to prove that origin and money aren't the pillars to build greatness, brain is.

Community content is available under CC-BY-SA unless otherwise noted.
Advertisement